Author and Artist Sheri Velarde
I am lucky enough to have been included in several anthologies with many other awesome authors, this page is dedicated to those books. 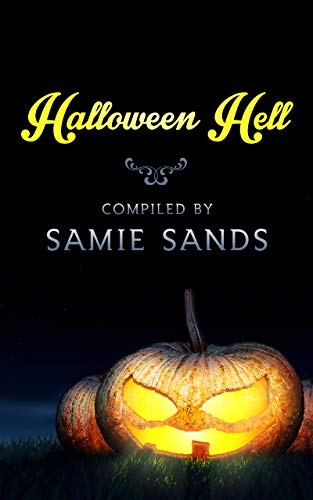 Welcome to Halloween...where this year it's Hell!
Ginger by Erin Louis
Trick or Treat by Danny Campbell
The Day That... by Samie Sands
The Missing by Harper Raine
Tranquility Inherited by John Clewarth
The Pumpkins Looked On by Tony Dews
From Below by Thomas M. Malafarina
Beware Unexpected Gifts by Sheri Velarde
Horror in the Haveli by Shashi Kadapa
Subway Ride to Terror by G.Bennett
Pumpkin Spice Joe by Armand Rosamilia
Red Wolf by Daniel Comnenus
Frankenstein’s Halloween by L. T. Emery
Curse of the Blood Moon: The Barn by Alexander C. Bailey
Samhain’s Revenge by C.L. Williams
The Chocolate Ghost by Dawn DeBraal 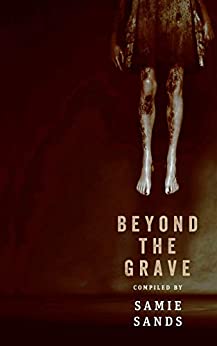 No one knows what lies beyond the grave, but everyone wants to find out. Dare you dive into these stories to see if you can handle what comes next? 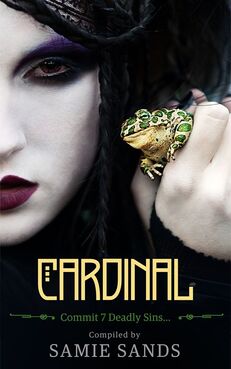 Which of the SIns have you committed? Which one will get you first?

The Gory Greed of Gareth Gorr by Kevin S. Hall
A Few Imperfections by Thomas M. Malafarina
Fountain's Wish by Lachelle Redd
It Came: 2020 by Brandon Swarrow
An Alternate Path to Redemption by Greg Bennett
Hell, at the Tele-Art by Danny Campbell
Seeing Green by Sheri Velarde
The Devil's Desire by Jason White
Blood Will Out by Katie Jaarsveld
All Seven by Samie Sands
Ice Man by Steve Thorne
Link: https://www.amazon.com/Cardinal-Commit-Seven-Deadly-Sins-ebook/dp/B089DPSL6M 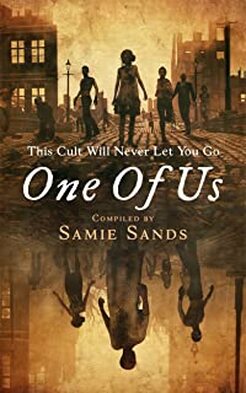 Become one of us, join our cult, it will be fun...I promise! What could be better than a group of friends who will do anything for you? And I mean ANYTHING? As long as you don't ever leave...

Death Metal: Midnight Maniac by Armand Rosamilia
Only the Lonely by Sheri Velarde
Street Fail by Thomas M. Malafarina
The Play of Dionysus by Alexander Bailey
Wingreen Uprising by C.L. WIlliams
Gushers: Zoe’s Secret Club by Chuck Buda
The Visit by Danny Campbell
Who Did It by Katie Jaarsveld
The Teachings of Father Soone by Greg Bennett
The Cult of Kayako by Kevin S. Hall
‘The One’ by Samie Sands
The Witches Bite by Linda Jenkinson
Day of the Clowns by Lila L. Pinord
Ghost by Jonny Graham
Maggot by Arnaldo Lopez Jr.
Link: ​mybook.to/OneOfUsAnthology 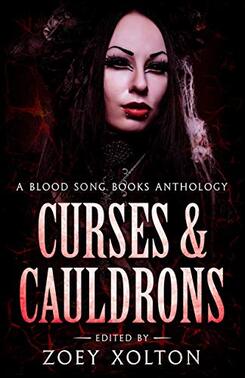 Over 200 tiny dark tales of magic, mischief, murder, mayhem & madness...
You do not want to get on the wrong side of these witches!
Let us cast a spell on you... with just 100 words. 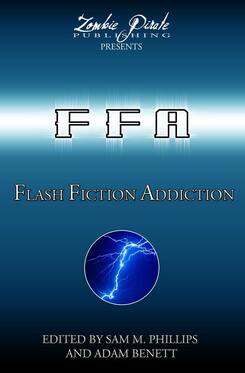 A daring pirate raid on a merchant ship ends in disaster. A dominatrix loses her dog. Officers count the terrible cost of human life in the wake of battle. A casting director comes face to face with his childhood bully. And why has a death sentence been issued for everyone named John Smith?
​
These are but a few of the thrilling tales inside. We've gathered authors from around the world into this compendium of fast fiction fixes. Each of these one hundred and one super short stories can be read in only a few minutes, just enough time as you wait for your high speed transport to arrive and whisk you away to your next adrenaline packed adventure.

This is FLASH FICTION ADDICTION, and there is no cure but to read more!
Link: http://a-fwd.to/5c9R48o 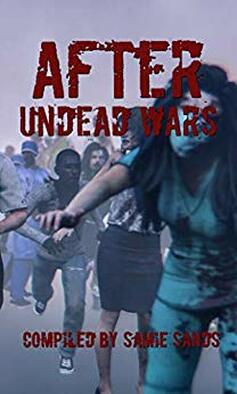 The infection has taken over the world, no one expected it to get this out of hand, there wasn't a plan for this. Now the undead are everywhere, zombies outnumber the living by thousands, so all everyone can do is try to survive...the only problem is not everyone can live.

The following stories from the war against the undead include best-selling, award winning horror authors:

Caged Barbarians by Chuck Buda
A Cold Winter by McKenzie Richardson
A Transplanted Dr. Franks by Katie Jaarsveld
Bright of the Living Dead by Thomas M. Malafarina
Hunger by Jensen Reed
Unnatural by GJ Stevens
The Package by Ryan Colley
What Happened to Emily? By C.L. Williams
Dying Days: Break Room by Armand Rosamilia
Punchline by Noel Osualdini
Are You There? By Samie Sands
The Hunger by Arnaldo Lopez Jr.
Do Zombies Dream of Undead Sheep? By Rick Eddy
Reanimation Lab by Sheri Velarde
Happily Ever Zombie by McKenzie Richardson
When the Cameras Stop Rolling by C.L. Williams
Teacher of the Undead by Alexander Bailey
Quarantine by Samie Sands
Link: mybook.to/AfterUndeadWars 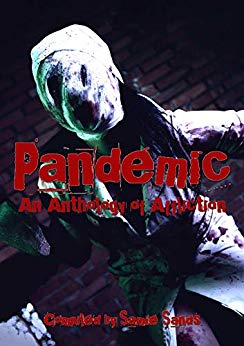 ​Viruses, infection, disease...there are hospitals that see it all, from the mild to the deadly. Dare you take a step into the unknown to find out what that affliction is and how it will destroy?

Dr. Frank N Steen by C.L. Williams
Welcome to the Age of the Unwell by Sheri Velarde
Hand Of An Alien by Armand Rosamilia
Just Awhile Longer by Kally Jo Surbeck
Dream Come True by McKenzie Richardson
By the Skin by Katie Jaarsveld
Meadowlands Room by Chuck Buda
The Patient by Xander Price
The Enemy Within by Alex Winck
Black Friday by Jace Fox
Affliction by Samie Sands
Pity by Danny Campbell
Spread the Infection by C.L. Williams
Test Subjects Wanted by Sheri Velarde
Outbreak by Samie Sands
Link: mybook.to/Pandemic 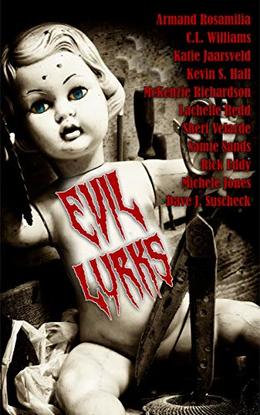 Evil Lurks
Evil is everywhere, you cannot escape it, there are things in this world that we simply cannot understand. Do you dare dive into the unknown, to explore the supernatural, to find where Evil Lurks? 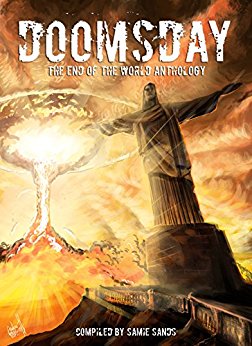 Doomsday: The End of the World Anthology
Doomsday...the end of the world is here, but how will the apocalypse happen? Will it be viral, an explosion, or simply human nature that destroys us? Read on, you might be surprised...

Home, Sweet Post-Apocalyptic Home by Alex Winck
Antidote by Samie Sands
From Strange to Indifferent by Katie Jaarsveld
Interim by Stefan Vucak
A Forever Kind of Love by Andrew Darlington
Talking Bodies by M. Earl Smith
Where the Water Is by Sheri Velarde
But a Whimper by Rick Eddy
The Countess Consuela by Michael Peirce
On Trial by Samie Sands
Thoughts of Memory by Andrew J Lucas and Natalie A. Lucas
Praying To Die by Fernanda Oz
Nightmare Rising by McKenzie Richardson
The Last of the Regulars by Andy Lockwood 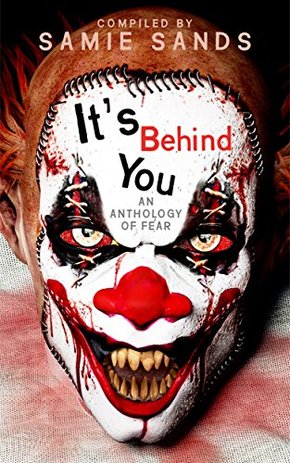 It's Behind You Horror Anthology
What is your biggest fear? Delve into these nightmares and phobias to see if you can handle it! 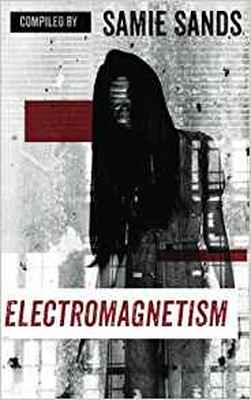 Electromagnetism Horror Anthology
"Anytime you give an electronic device a brain, it has the capabilities to outgrow the possibilities that were set forth in the plans."

Only .99 cents and available on Kindle Unlimited! Also available in paperback!
Link: mybook.to/Electromagnetism 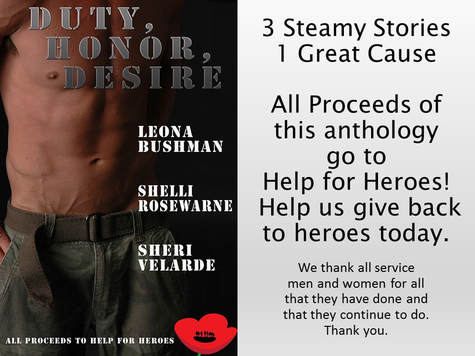 Three military based stories in one steamy collection with proceeds going to a good cause.

They say all's fair in love and war – but what happens when duty and honor clash with desire? Find out in these short and steamy romances, involving servicemen and women.

All proceeds to Help for Heroes. 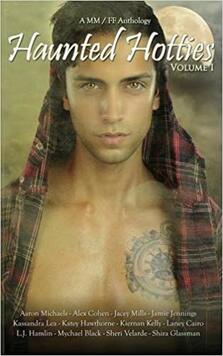 I have a limited number of paperback copies of Haunted Hotties still available. If you would like one, please just send a message here and we will work something out! Only $8.00. $2.00 shipping and handling for US addressed. Message me for pricing if you live outside the United States.

​This Halloween collection has a little something for everybody. With demons, ghosts, psychics, reapers, shifters, and witches... a rainbow of paranormal/supernatural is included. In Nine-Tenths of the Law by Kiernan Kelly, Oliver discovers he has a haunted sex toy. In Bear Hugs by Laney Cairo, Martin's boyfriend might be bear shifter and apparently that's news to him. In Houdini's Masquerade by Alex Cohen, when Lila meets a succubus, everything changes. In Præsidium by Katey Hawthorne, Thackeray needs helps from a witch who won't help him until he explains his demon. In Black Cat by Jamie Jennings, when a cat shifter can see ghosts, Micah's simple life suddenly isn't. In Haunted Honeymoon by Aaron Michaels, Dylan and Jake seem to be sharing their non-honeymoon with a couple of ghosts. In And the Tarot Cards Said by Jacey Mills, an insistent ghost shouldn't be too much to handle for psychic Vassily and his Tarot-reading assistant Ben. In Spirit Wolf by L.J. Hamlin, when Dawson rescues an injured wolf shifter, it's not just his book that gets worked on while getting back to nature. In Wet Nails by Shira Glassman, it's not every day a glamorous '50s actress comes out of a TV but lonely grad student Adina isn't complaining. In Possessed by Love by Sheri Velarde, a storm trapping them together gives Andrew and Damian the chance they've been waiting for. In The Last Night by Kassandra Lea, Eric gets one night a year and he always picks one particular Halloween. In Molly by Mychael Black, Detectives Cameron and Chase discover the murderer plaguing their city is more sinister than they could have known and not entirely human.